This dad was surprised by his seventeen month old baby when he was on stage playing “Brown Eyed Girl“. I’ll bet he is going to be another up and coming Van Morrison fan.

What’s So Special About Van Morrison

I was brought up in East Belfast -yes that’s where Van Morrison lived too.   He is one of our heroes.  Although it may not seem like it if you watch the news about N Ireland, Belfast is a great place to live and so is N. Ireland.  We have lots of things and lots of people to be proud of including Rory McIlroy, George Best and of course the one and only Van Morrison.

One of my favourite songs is “Brown Eyed Girl” although I was a blue eyed girl myself. The first time I heard him sing was with a group called Them – and the song was the glorious “Gloria”.  They played at all the trendy places in Belfast which was great for their fans but it wasn’t very lucrative for them.

“Them” grew tired of being manipulated by the music industry and moved back to Belfast.   While there he was offered the opportunity to record four singles. Van decided to do this  and  ”Brown Eyed Girl was one of the songs.

I am sure that when Van wrote the lyrics for this song he never expected that millions of people would be still be listening to it in 2013.  When he was a struggling musician in his twenties he played at many gigs all over Ireland and England.  He didn’t earn much money but he got a lot of experience and he realised that if he wanted to earn the big money he needed to take control of his talent.  He had the millionaire mindset.  That’s why he  decided to produce his own records and the reason he is  now a multi – millionaire.

That’s how it is for most successful people, they have to be prepared to put all their efforts into their business in the beginning if they want to reap the big rewards in the future.

So it is with blogging – you need to blog daily and you will become a better blogger with loads of content.  Remember content is the currency of the internet and it will provide you with a long term passive income if you do it right.

The best way to get the training plus an authority blog which give you the opportunity to rank high on Google is by click the banner below and when you see the page put your email in and click the submit button.  It’s as easy as that.

Click the banner and find out how to create content, capture leads and convert them into sales. That’s all there is to it. The training is there for you. The selling is done for you. So what are you waiting for? 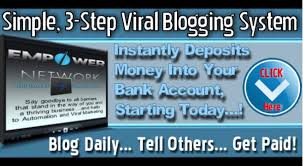 Want to know more about internet marketing? Press the button below to call us now!

The Luxury Way To Watch Your YT Videos